Minnie Lee Bagwell Duncan, 98, wife of the late William A. Duncan, Jr. and a resident of Onancock, VA, passed away Tuesday, October 13, 2020, at her residence. A native of Cheriton, VA, she was the daughter of the late Thomas Bagwell and the late Gladys Hanby Bagwell. She was a retired Bank Manager for Crestar Bank and a member of Market Street United Methodist Church.

A graveside service will be conducted Saturday, October 17, 2020, at 2:00 PM at Cape Charles Cemetery with Pastor Virginia Greer officiating. Arrangements were made by Doughty Funeral Home in Exmore, Virginia.1 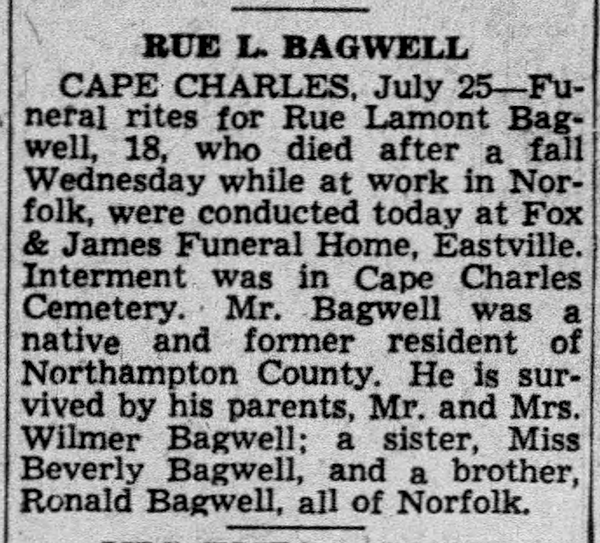 W. Ronald Bagwell, 95, passed away peacefully on Saturday, March 13, 2021, in a local hospital. Ronnie was a retired civil service manager at the Naval Air Rework Facility, NAS. Born in Johnsontown on Virginia's Eastern Shore, he was the son of the late Verna Rooks Bagwell and Wilmer Wyatt Bagwell. He was preceded in death by his beloved wife of 69 years, Rose Parron Bagwell, his two sisters, Virginia Gast and Beverly Brooks, and his brother, Rue L. Bagwell.

Left to cherish his memory is his son, Rue L. Bagwell II (Bonnie); two grandsons, Ron Bagwell (Stacie) and Clint Bagwell; five great-grandchildren, Parker, Tyler, Katie Rose, Austin, and Alex; and a multitude of friends who will miss him dearly.

A funeral service will be conducted at 11:00 AM on Thursday, March 18, at Epworth United Methodist Church, with Rev. Saunnie Butts officiating. Burial will follow in Forest Lawn Cemetery with Masonic Rites. In lieu of flowers, memorial contributions may be made to Epworth United Methodist Church, 124 W. Freemason St., Norfolk, VA 23510. Online condolences may be sent to the family through www.hdoliver.com.1

He was buried on 18 March 2021 at Forest Lawn Cemetery, Norfolk, Norfolk City, Virginia.1

NORFOLK - Rose Parron Bagwell, 89, passed away peacefully on Thursday, December 21, 2017 with her loving family by her side. Born in Norfolk, Virginia, she was the daughter of the late Walter C. Parron, Sr., and Mary Owens Parron.
The youngest of seven siblings, she was preceded in death by her three brothers and three sisters. Rose was a graduate of Maury High School, Class of 1946, and attended Madison College in 1946 and 1947. She was employed for many years as office manager for the Liberty Loan Corporation, Wards Corner branch. A faithful, sixty-year member of Norfolk's Epworth United Methodist Church and its Wesleymen Bible Class, she was a former “Class Mother”. Additionally, she was a member of Epworth's Crusader Bible Class, as well as the Soroptimist Club International of Hampton Roads.
Left to cherish her memory is her husband of almost 70 years, W. Ronald Bagwell; her son, Rue L. Bagwell, II (Bonnie) of Chesapeake; two grandsons, Ron Bagwell (Stacie) and Clint Bagwell; five great-grandchildren, Parker, Tyler, Katie Rose, Austin, and Alex; several nieces and nephews; and many friends who loved her dearly.
A memorial service will be conducted at 2:00 p.m. on Wednesday, Dec. 27th in the Norfolk Chapel of H. D. Oliver Funeral Apts., 1501 Colonial Ave., with Reverend Ned Alderman officiating. In lieu of flowers, memorial donations may be made to Epworth United Methodist Church or the Wesleymen Bible Class. Online condolences may be offered at www.hdoliver.com.1

F, b. circa 1830
Elizabeth M. Johnson was born circa 1830 in Virginia. She married George T. Bagwell on 19 December 1848 at Northampton County, Virginia. As of before 1851,her married name was Bagwell.

F, b. circa 1856
Susan Bagwell was born circa 1856 in Virginia. She was the daughter of George T. Bagwell and Elizabeth M. Johnson.

F, b. circa 1860
Louisa Henderson was born circa 1860. As of 8 July 1878,her married name was Bagwell. She married Lyttleton Bagwell, son of George T. Bagwell and Elizabeth M. Johnson, on 8 July 1878 at Northampton County, Virginia.

Children of Littleton Bagwell and Unknown (?)

M, b. circa 1842
George Bagwell was born circa 1842 in Tennessee. He was the son of Littleton Bagwell and Unknown (?)

M, b. circa 1845
Crawford Bagwell was born circa 1845 in Tennessee. He was the son of Littleton Bagwell and Unknown (?)

M, b. circa 1846
Joseph Bagwell was born circa 1846 in Tennessee. He was the son of Littleton Bagwell and Unknown (?)

Children of Unknown (?) and Littleton Bagwell

F, b. 25 June 1920, d. 19 January 2014
Lois Alberta Gordon was born on 25 June 1920 in Kokomo, Howard County, Indiana. As of 26 December 1941,her married name was Bagwell. She married Chester A. Bagwell, son of Clarence Elsworth Bagwell and Lena Olive Ball, on 26 December 1941. Lois Alberta Gordon died on 19 January 2014 in Phoenix, Maricopa County, Arizona, at age 93 To the outsider, Lois Bagwell was a quiet and unassuming woman, a homemaker most of her long life. But to her husband, Chester, and her two sons, Steven and Keith, she was a loving wife and mother who devoted herself to their well-being and happiness.

Lois and Chet were married, happily, for more than 72 years. They formed a team to raise and support their sons, both of whom obtained advanced college degrees and are engaged in successful careers. Evan more important to Lois and Chet, the sons both have enjoyed long and loving marriages of their own.

Lois was born in Kokomo, Indiana, in 1920. She was raised in Tipton, Indiana, where she graduated from high school. She attended Franklin College in Indiana for one year.

She met Chet in 1941 and they married on December 26, 1941, immediately before Chet's induction into the Army. The couple moved to Phoenix in 1953 because of Lois' troublesome health problems, with their sons, then aged 5 and 3, in tow.

The family moved into a new home on the near east side in Phoenix in April 1954, and they raised their children as Lois made a warm and convivial home. They remained in the same home until declining health forced them into an assisted-living facility in March 2012.
Lois fell in October 2013, breaking three bones. She rallied for a time, but the damage was too great. She passed away on Sunday, January 19. She was buried at Green Acres Memorial Park, Scottsdale, Maricopa County, Arizona.

Children of Lois Alberta Gordon and Chester A. Bagwell

M
Keith Bagwell is the son of Chester A. Bagwell and Lois Alberta Gordon.