Mr. Bagwell was a native of Carnesville, GA but has lived in Augusta for the last 57 years. He was President of Bagwell Insurance Services.

A true southern gentleman, Dwight could most often be found spending time with his friends and family. Whether hosting casual gatherings at the lake, traveling on fishing trips with his best buddies, or cheering on the Georgia Bulldogs, he was the happiest around those he loved. A dedicated husband and father to his family, and a loyal friend to many, he will be deeply missed by those who knew him.


Mrs. Mary Anne Beggs Bagwell, 89, loving wife of the late Ralph David Bagwell, entered into rest with her Lord and Savior on Sunday, May 8, 2022.

She was born September 26, 1932, in Carnesville, GA to the late Rufus Fred and Wilna Beard Beggs. Mary Ann was a member of Pineview Baptist Church.

Mary Anne was a devoted wife and mother, and Grandmother. She deeply loved her family and friends. She always enjoyed serving them a home cooked meal. She worked part time in the family insurance business. She loved to spend her weekends with family and friends, traveling, or bargain shopping.

Graveside services will be held at 3:00pm on Thursday, May 12, 2022, at Bellevue Memorial Gardens, 4501 Wrightsboro Road, Grovetown, GA 30813. The family will receive friends graveside one hour prior to service time.


She was buried on 12 May 2022 at Bellevue Memorial Gardens, Grovertown, Georgia.

She was daughter of Mary Ruth Bagwell and the late William L. Bagwell and ex-wife of Larry Tim Biggerstaff. She was mother of a son, Jason Lloyd. She was a partner in the Hill and Thompson, Magid and Co., inc., brokerage firm in New York.

Lois Bagwell is the daughter of Roland Carl Bagwell and Lia Mae Carr. 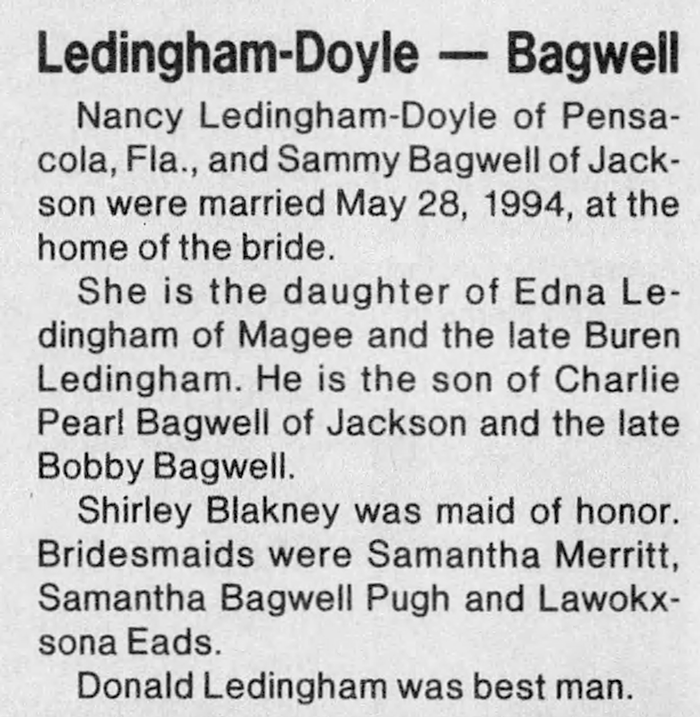