Children of Honorine B. Dujany and William Powers Bagwell Jr.

F
Christina Bagwell is the daughter of William Powers Bagwell Jr. and Honorine B. Dujany.

F
Nicole Bagwell is the daughter of William Powers Bagwell Jr. and Honorine B. Dujany.

M
William Andrew Bagwell is the son of William Powers Bagwell Jr. and Honorine B. Dujany. 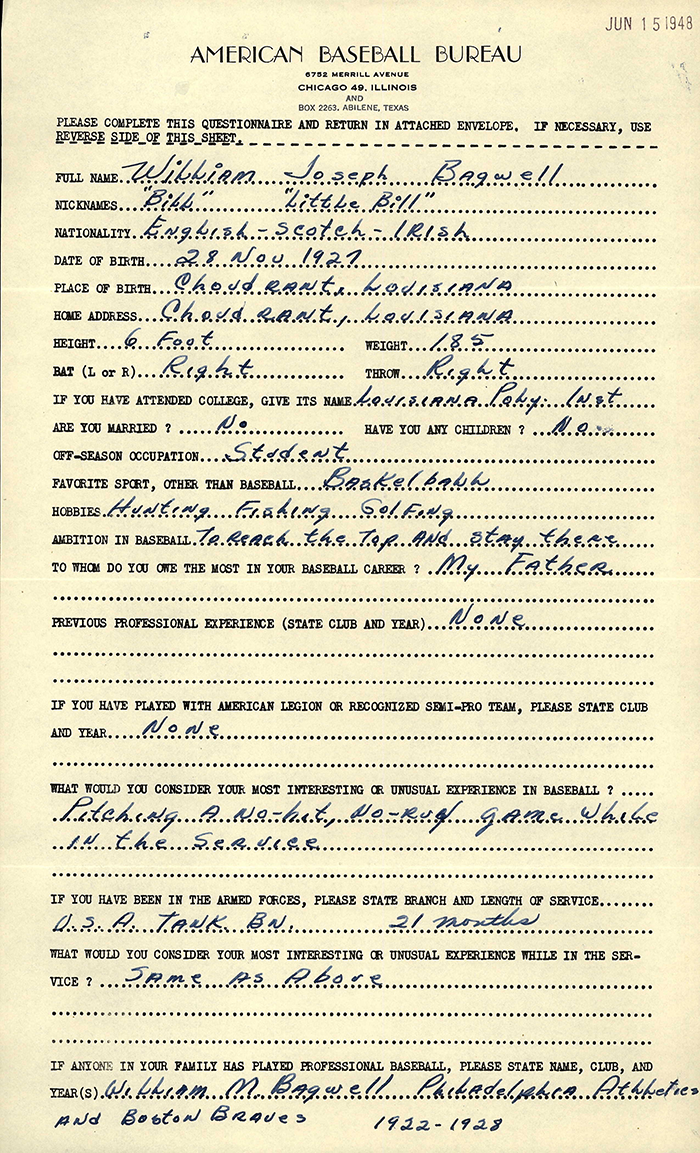 
Tanner L. Bagwell, loving husband, dad, uncle, son, brother, cousin, nephew, and friend, went home to be with his Father in Heaven on October 31, 2020. He departed this life peacefully with his loving wife and parents by his side after a month-long illness.

Tanner was born on August 22, 1973 to Robert & Nellie May (Hutchins) Bagwell. He is the sixth in a family of eight children and is deeply loved by his parents, siblings, and all who came to know him. He will be greatly missed. Tanner had a wonderful childhood working with his Dad, Mom, and brothers on the family farm and ranch, going on mountain adventures with his cousins, and enjoying friends while attending school in Manassa and at Centauri. Tanner had a wonderful personality and was always making people laugh. Tanner served a mission for the Church of Jesus Christ of Latter-day Saints in the Mexico – Mexico City South Mission, leaving the same day as his birthday-buddy and close cousin, Clinton Huffaker. After his mission he attended and graduated from Adams State College.

Tanner was married and sealed in the Denver Colorado Temple to the love of his life, Jessie Jarvies, on March 17, 1998. God blessed their lives with three wonderful children, Reanna, Logan, and Conner. They became his best help on the family farm, he taught them well. He dearly loves his children and loved teasing them. Whether it was working together on the farm, going to the mountains, or just going for a drive, they found joy in just being together.

Tanner was highly active in his church and community. He served in many callings, including being Bishop of Manassa First Ward. He was a great man and enjoyed each calling he had, knowing it was service to his fellow men and to his Savior Jesus Christ.

Graveside services for Tanner L. Bagwell will be held on Thursday, November 5, 2020 at 11:00 a.m. at the Manassa Cemetery.

Tanner has dearly loved his wife and children, Bagwell and Jarvies families, huge extended family, farm and ranch, his home, his cattle and dog, his ward, and community. Many will miss great conversations with Tanner, his kindness, incredible laugh, strong opinions, quick wit, and great sense of humor. Tanner’s strong testimony of the gospel of Jesus Christ was reflected in all that he did. “I have fought a good fight, I have finished my course, I have kept the faith.” 2 Timothy 4:7.1

Conner Bagwell is the son of Tanner L. Bagwell and Jessie Jarvies.1

Logan Bagwell is the son of Tanner L. Bagwell and Jessie Jarvies.1

Reanna Bagwell is the daughter of Tanner L. Bagwell and Jessie Jarvies.1

Tyson Bagwell is the son of Robert L. Bagwell and Nellie May Hutchins.

Wendy Bagwell is the daughter of Robert L. Bagwell and Nellie May Hutchins. Wendy Bagwell married Larry Helms on 29 April 1987.


Ms. Leslie Marie Bagwell, 32, a resident of Leemont, VA, passed away Wednesday, May 15, 2013. Born January 30, 1981, she was the daughter of Patrice Willett Wallace and husband, Lowell, of Leemont, and Buster Bagwell of Eastville, VA; and a beloved granddaughter of Meta Willett of Leemont, and the late Nathaniel "Nate" Willett.

In addition to her parents and grandmother, she leaves behind her daughter, Maya Jasmine Bagwell; a sister, Gracie Wallace, both of Leemont; a half-brother, Ryan Bagwell of Girdletree, MD; a step-sister, Megan Wallace of Bloxom, VA; five aunts, Vicky Curtis, Tammy Willett, Sherri Glovier, Roberta Jennestreet and Terry Carver; one uncle, Billy Bagwell; and several cousins.

Leslie will forever be remembered for her free spirit, kind heartedness, and her unique ability to make everyone feel happy. There was never a time that you would see her that she didn't have a beautiful smile on her face and a shoulder on which to lean. Her greatest passions in life were music and art. You could often find her listening to her favorite ‘Phish' album while creating one of her many pieces of jewelry or artwork. Although she is no longer here with us, her memory will live on, and her spirit will forever shine through her sweet baby girl, Maya.

A celebration of Leslie's life will be conducted from the graveside at the Parksley Cemetery on Saturday, May 18, 2013 at 1:00 p.m.1


She was buried at Parksley Cemetery, Parksley, Accomack County, Virginia.1 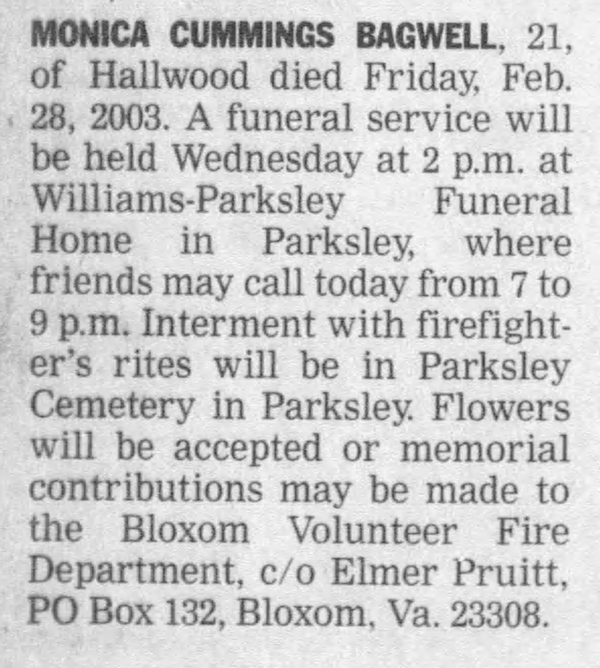