Born in Pickens County, a son of Hazel Medlin Bagwell of Easley and the late Lonnie Leon Bagwell, Mr. Bagwell retired as an accountant with Interstate Bakeries and was a member of St. Luke United Methodist Church.

Memorials may be made to the Muscular Dystrophy Association, 25 Woods Lake Road, Greenville, SC 29607.1 He was buried at Greenlawn Memorial Park, Easley, Pickens County, South Carolina.1

Hazel was born in Lavonia, GA on September 15, 1918 to the late Oscar and Bonnie Hand Medlin. The wife of the late Lonnie Leon Bagwell, she worked for many years in the various cotton mills around Easley. She loved to spend time with her family and friends, and was a member of Bible Methodist Church for over 40 years before moving her membership to the Neighborhood Church, where her Grandson is pastor.

She was preceded in death by her son; Larry Leon Bagwell.

Jan Bagwell is the son of Lonnie Leon Bagwell and Hazel Willene Medlin.

Nadine Bagwell is the daughter of Lonnie Leon Bagwell and Hazel Willene Medlin.

Medley Bagwell is the daughter of Tandy Walker Bagwell and Elizabeth Della Freeman.

In lieu of flowers, memorials may be made to the Inman Rescue Squad.

Published in the Spartanburg Herald-Journal on 8-24-1984.1
He was buried at Fort Prince Memorial Gardens, Wellford, Spartanburg County, South Carolina.1

Mrs. Bagwell was born in Inman on May 22, 1917, the daughter of the late Solomon Gola and Mary Adaline (Mintz) Smith and was the wife of the late James "Hugh" Bagwell.

She retired from Lyman Printing and Finishing and was a Charter member of the Inman Church of God.

She is survived by one daughter, Norma B. Nichols; five grandchildren; and seven great-grandchildren. She was predeceased by a daughter, Lynda Mayfield; and a son-in-law, Dennis "Debo" Nichols, along with three brothers and four sisters.

Funeral services will be held at Seawright Funeral Chapel, Inman at 3 p.m. on Saturday, January 5, 2008, with Dr. Richard Dillingham and Rev. Roger Allison officiating. Burial will be in Inman Cemetery, Inman.

The family is at the home of her daughter, Norma Nichols, 625 Circle Rd., Greer, SC and will receive friends Saturday from 2 to 3 p.m. at Seawright Funeral Home.

A native of Spartanburg County, she was a daughter of the late James Hugh and Ruth Smith Bagwell and a retired employee of Nichols Chemicals, Inc.

She was also predeceased by one sister, Lynda Mayfield.

F, b. 1943, d. 1992
Lynda Bagwell was born in 1943.1 She was the daughter of James Hugh Bagwell and Ruth Mae Smith. Lynda Bagwell died in 1992.1 She was buried at Hillcrest Memorial Gardens Memorials, Greer, Spartanburg County, South Carolina.1

F, b. 1 November 1897, d. 16 June 1981
Maude Mattocks was born on 1 November 1897 in Pinos Altos, Grant County, New Mexico.1 As of before 1920,her married name was Bagwell.1 She married Russia Alonzo Bagwell, son of Oscar Alonzo Bagwell and Mary Christine Scott, before 1920.1 Maude Mattocks died on 16 June 1981 in Silver City, Grant County, New Mexico, at age 83 Maude M. Bagwell of Silver City passed away Tuesday, June 16 in her residence. She was born November 1, 1897 in Pinos Altos, the daughter of James and Lilly Moore Mattocks and had lived in Silver City most of her life. She was employed as a clerk for the Silver Office Supply for many years. She was a life member and Past Matron of the Georgetown Chapter #4 Order of Eastern Star, Silver City Women's Club, a very active member of several organizations of the First Baptist Church, especially the Mary Martha Sunday School Class. She is survived by one daughter Mrs. Richard Ferne Nolan of Silver City; one son, Rush A. Bagwell of Steamboat Springs, Colo; one brother, George F. Mattocks of Silver City; three grandsons; one great-grandson. Her husband Rush A. Bagwell preceded her in death in 1965. Services were held Friday, June 19 at 2 p.m. in the Curtis Bright Chapel under the direction of Rev. Donald Wiley of the First Baptist Church. Burial followed in the Masonic Cemetery, Silver City. Serving as pallbearers were: Leroy Smith, Jap Housley, Howard Silvius, Charles Thurber, Bob Humphrey, and Meredith Neal. In lieu of flowers, friends who wish may contribute to the First Baptist Church of Silver City. Arrangements by the Curtis Bright Funeral Home.1 She was buried at Masonic Cemetery, Silver City, Grant County, New Mexico.1

A memorial service will be held at 11:30 a.m., Friday, Aug. 22, at Taylor Funeral Service Chapel in Delta with Father Tom Seibert officiating. Entombment will follow at Mesa View Cemetery.
Mr. Bagwell was born in Santa Rita, N.M., May 2, 1925, to Rush and Maude (Mattocks) Bagwell. He attended elementary school in Silver City and Santa Rita and graduated from Hurley High School in 1943.
He served in the U.S. Navy and was stationed in Pearl Harbor.
Following his discharge from the Navy, Mr. Bagwell returned to New Mexico and married Clarice York on Aug. 29, 1947, in Santa Rita. The couple lived in Denver and Steamboat Springs before retiring in Austin.
Mr. Bagwell enjoyed being with his family, sports, horses and the cowboy lifestyle.
He is survived by his wife, Clarice Bagwell of Austin; two sons, Brett Bagwell and Brian (Ann) Bagwell; two grandchildren, Travis (Deja) and Courtney (Chris); and three great-grandchildren, Jersey, Hunter and Brodie.
Taylor Funeral Service and Crematory handled the arrangements.
View the Internet obituary and sign the online guest registry at taylorfuneralservice.com.1 He was buried at Mesa View Cemetery, Delta, Delta County, Colorado.1

M
Brett Bagwell is the son of Rush Adams Bagwell and Clarice York.

M
Brian Bagwell is the son of Rush Adams Bagwell and Clarice York. 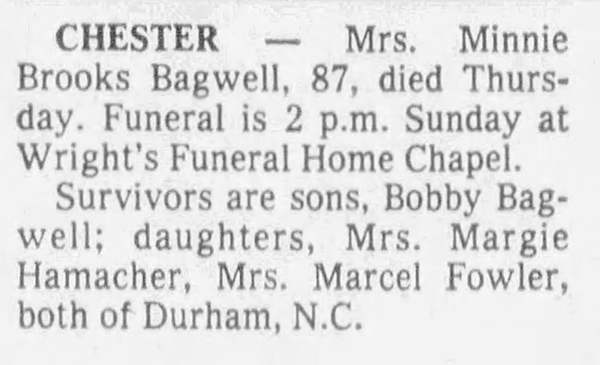 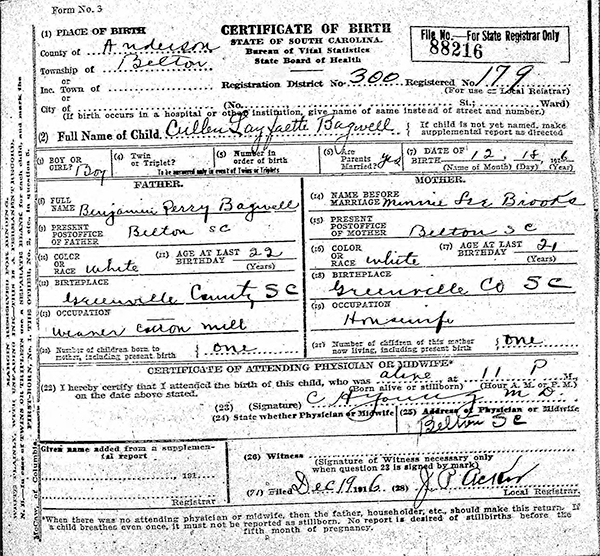