M
Richard B. Bagwell is the son of Robert William Reyes Bagwell and Liberata Camarines Budlong.


Flag Photo Herman Otis Mitchell, Sr. Lansing Herman Otis Mitchell, Sr. was born on October 10, 1930 to Otey and Clara Mitchell, who preceded him in death. He was the youngest of three children. Herman regularly attended church with his parents and sisters. As a young boy, Herman´s hard work ethic was evident with his newspaper route. While attending Cass Technical High School (class of 1947), Herman had an apprenticeship where he designed the building for Tannery Leather Company. He enlisted in the United States Air Force (1949-1953), fought in the Korean War and was a Tuskegee Airman. Herman attended Michigan State University and began working for the Michigan Highway Department (1958) as a civil engineer. He drew the layout and design of the I-696 freeway overpass (east and west) over the I-75 freeway in Metropolitan Detroit and other bridges within the state, including the Lansing area. Herman helped draw the layout and design of the St. Lawrence Seaway in Ontario, Canada; a system of locks, canals and channels that allow ocean-going vessels to travel from the Atlantic Ocean to the Great Lakes. Herman retired from the State of Michigan Department of Transportation. Later in life, Herman was a tax preparer and consultant.

Herman endured racism and mistreatment both in the military and on the job. He used his sense of humor to deal with whatever life brought his way, even the reoccurrence of his illness.

Herman was benevolent to his family, friends and community. His jokes and boisterous laugh often made him the life of the party. Herman played the clarinet and performed in a band in Lansing. He was an eternal learner and had a lot of respect for education. Herman took courses at Lansing Community College and attended conferences to gain knowledge about the latest tax updates. Herman also formed and led an Alcoholics Anonymous support group. 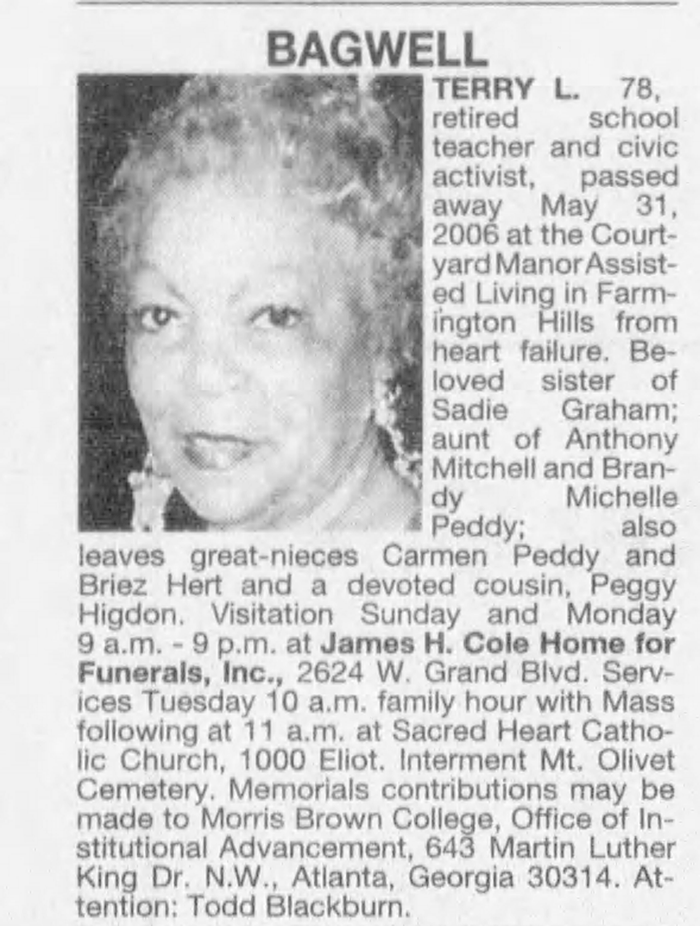 Frances Bagwell is the daughter of Columbus B. Bagwell and Lillian Gunnells.

Katherine Bagwell is the daughter of Columbus B. Bagwell and Lillian Gunnells.

Children of George Bagwell and Milly (?)

Children of Milly (?) and George Bagwell

Children of Jacob Bagwell and Jane (?)

Children of Jane (?) and Jacob Bagwell

F, b. circa 1858
Isabella Bagwell was born circa 1858 in Tennessee. She was the daughter of Jacob Bagwell and Jane (?)

F, b. circa 1866
Columbia Bagwell was born circa 1866 in Kentucky. She was the daughter of Jacob Bagwell and Jane (?) 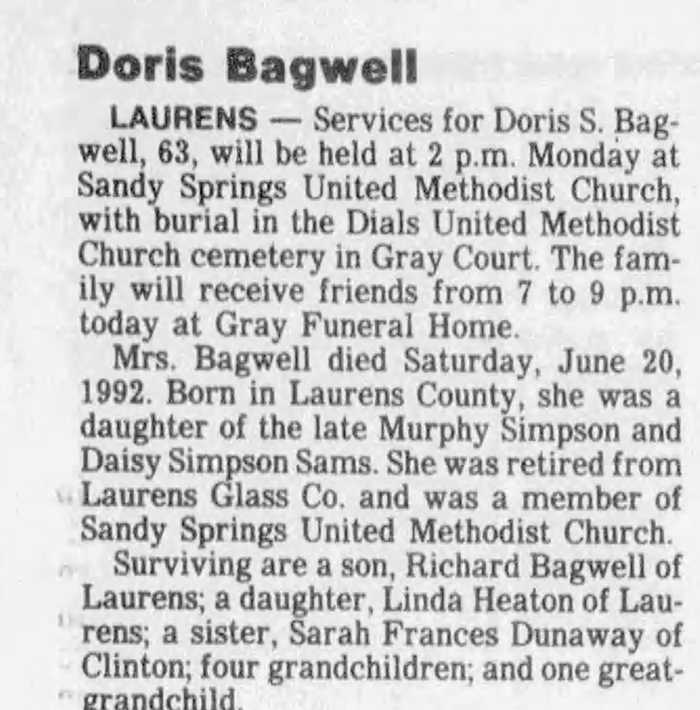 She was born in Laurens County, and was a daughter of the late John Thomas and Doris Simpson Bagwell.

Mrs. Heaton was employed with Teknor Apex Carolina in Fountain Inn. She was an active member of First Responders for Sandy Springs Fire Department (and served on their Board of Directors), and was a member of Northside Baptist Church.

Surviving are her husband, Tim Heaton, of the home; two daughters, Susan Heaton Hurley and Tina D. Heaton, both of Laurens; and three grandchildren, Brittany and Morgan Hurley, and Amber Heaton, all of Laurens.

Funeral services will be conducted Saturday, May 3, at 3 p.m. at Northside Baptist Church, with burial at Sandy Springs United Methodist Church Cemetery.

The family will receive friends this evening from 7 to 9 p.m. at Northside Baptist Church.