Married to Ella A. L. Crane prior to 1869. She was the daughter of Jasper G. Crane (born about 1814 in Connecticut) and his wife Frances E. Parker born about 1819 in Kittery, Maine. Ella died on February 25, 1890, of Cancer of the Uterus in either Boston, Massachusetts or Ontario, Canada. Her 1890 Death record listed her address as 156 Worcester (which is an address in Boston) yet listed her place of death as "Ontario".

George and Ella had one known child. A daughter named Frances Dell "Fannie" Bagwell born in 1869. She was married in 1892 (two years after he mother died) to Henry St. Lawrence Chandler in Toronto, Ontario, Canada.


He was buried at Hamilton Cemetery, Hamilton, Hamilton Municipality, Ontario.

Child of George McDonald Bagwell and Ella A. L. Crane

M, b. 31 January 1851, d. 23 August 1901
Frederic William Bagwell was born on 31 January 1851 in Hamilton, Wentworth, Ontario, Canada.1 He was the son of John Bull Bagwell and Mary Ann Rooke. Frederic William Bagwell married Margaret "Maggie" Brownleigh on 3 October 1877 at Hamilton, Wentworth, Ontario, Canada. Frederic William Bagwell died on 23 August 1901 in King County, Washington, at age 50 Inscription:
born in Hamilton Ontario Canada-he set aside a part of his land for the Masonic fraternity's cemetery and his was the first grave . He married in 1877 in Canada. They arrived in Tolt in 1888 and he was not only clerk of the school board but Justice of the Peace.1
He was buried at Carnation Cemetery, Carnation, King County, Washington.1

The O.C.F.A. (Ontario Cemetery Finding Aid) listed this cemetery (St. Peter's Anglican in Cobourg) as the burial place for Eva and her husband Wallace Halle.

F, b. 3 July 1885, d. 12 February 1971
Flora Ethel Crawford was born on 3 July 1885 in Kansas.1 As of before 1906,her married name was Eastman. She married Paul Andrew Eastman before 1906. As of after 1946,her married name was Bagwell. Flora Ethel Crawford married Frederick Brownleigh Bagwell, son of Frederic William Bagwell and Margaret "Maggie" Brownleigh, after 1946. Flora Ethel Crawford died on 12 February 1971 in Snohomish, Snohomish County, Washington, at age 85.1 She was buried at Caranation Cemetery, Carnation, King County, Washington.1

F, b. 1891, d. 1914
Martha Hyden was born in 1891 in Kentucky.1 As of 4 March 1910,her married name was Bagwell. She married Frederick Brownleigh Bagwell, son of Frederic William Bagwell and Margaret "Maggie" Brownleigh, on 4 March 1910. Martha Hyden died in 1914.1 She was buried at Caranation Cemetery, Carnation, King County, Washington.1

F, b. 19 January 1880, d. 1947
Lucy Eva Bagwell was born on 19 January 1880 in Kansas.1 She was the daughter of Frederic William Bagwell and Margaret "Maggie" Brownleigh. Lucy Eva Bagwell lived in 1930 in King County, Washington. She died in 1947 Note: She stayed home and took care of the house for the family.1 She was buried at Carnation Cemetery, Carnation, King County, Washington.1

F, b. circa 1880
Rosa E. Bagwell was born circa 1880 in Kansas. She was the daughter of Frederic William Bagwell and Margaret "Maggie" Brownleigh.

Services will be held at Paul's McKinleyville Chapel Thursday, Nov. 20, 1969, at 2 p.m. Interment will follow at Greenwood Cemetery.

*Marian's Social Security record lists her first name as Marian and her birth year as 1914 which agrees with the information in her obituary.


She was buried at Greenwood Cemetery, Arcata, Humboldt County, California. 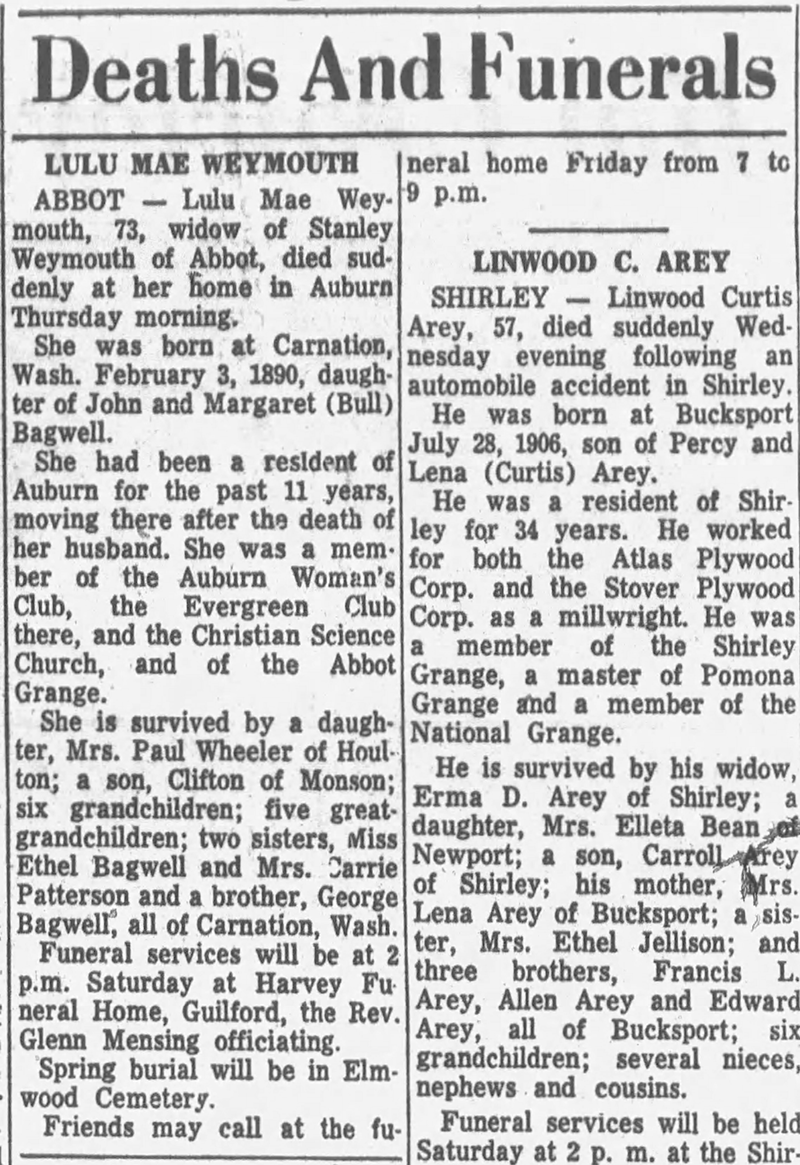 F, b. 15 October 1891, d. 10 December 1984
Ethel Blanch Bagwell was born on 15 October 1891 in Washington.1 She was the daughter of Frederic William Bagwell and Margaret "Maggie" Brownleigh. Ethel Blanch Bagwell died on 10 December 1984 in Redmond, Washington, at age 93 Note: She worked for the bank and became the manager of the First National Bank branch in Carnation.1 She was buried at Carnation Cemetery, Carnation, King County, Washington.1

F, b. 11 April 1896
Ruby Bryle Bagwell was born on 11 April 1896 in Hamilton, Wentworth, Ontario, Canada. She was the daughter of George McDonald Bagwell and Clara Louise Mutter.