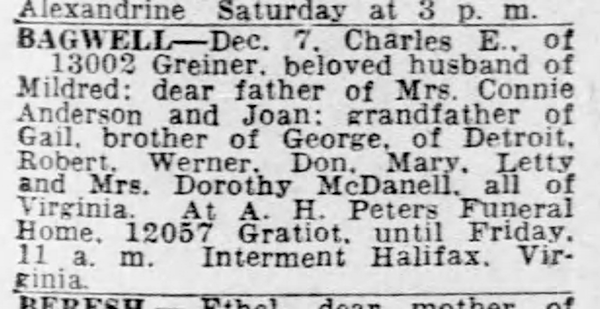 Faith Anderson Bagwell was born on 25 February 1884 in Virginia. She was the daughter of Captain George Hamilton Bagwell and Rose Dix Twyford.

He was born July 10, 1917, in Henderson County and was a resident of Buncombe County since 1957. He was next to the last child of 12 children born to the late John Bagwell and Ellen Garren Bagwell. He attended Western Carolina University and Wofford College. He played baseball at Spartanburg-Methodist College and Wofford College. He enjoyed his professional baseball career with the Raleigh Capitals, the Richmond Colts and Mooresville. After returning from World War II, he returned to pro ball for a brief time, including mill ball with the Berkley Spinners, before his teaching/coaching career. He was a retired school teacher and coach at Erwin High School and coached many youth teams throughout the years. As a tribute to him, the baseball field at Erwin bears his name.

A funeral will be held at 11 a.m. Saturday in Woodland Hills Baptist Church, with the Rev. Dr. Billy Cline officiating. Burial will be in West Memorial Park, Weaverville, with full military graveside rites conducted by Mars Hill VFW Post No. 5483.

The family will receive friends from 6 to 8 p.m. Friday at West Funeral Home, 17 Merrimon Avenue, Weaverville, where the body will remain until placed in the church one hour prior to the services. He was buried at West Memorial Park, Weaverville, Buncombe County, North Carolina. 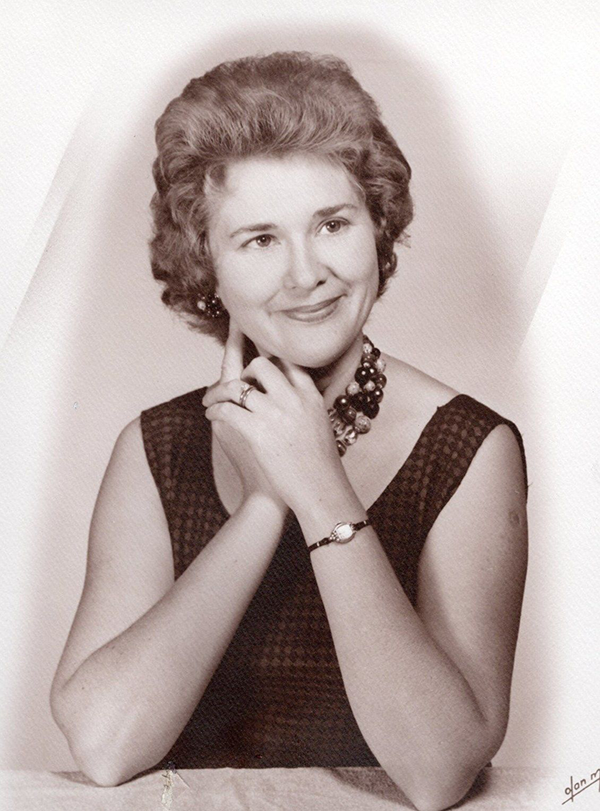 Lou was a good and faithful daughter, wife, mother, and grandmother. She is known for her teaching service in Wayne County and Statesville-Iredell County school systems. Lou had a love for music and recognized the importance of teaching it to young children and adults. She was called to the music ministry at several local churches, including Adamsville Baptist Church in Goldsboro, N.C., and later Fairview Baptist Church in Statesville, N.C. Her devotion to church also included teaching adult sunday school classes.

Lou was the sixth of seven children born to Thomas and Grace Spivey Bagwell in Fletcher, N.C. She spent most of her childhood growing up Fairview, N.C. After graduating from Fairview High School, she did her undergraduate studies at Mars Hill College, Brevard College, and later Campbell College, N.C.

On August 24, 1951, Lou married her beloved husband, Eugene B. Hager, at First Baptist Church in Huntersville, N.C. They had three sons, Michael, David, and Mark; and one daughter, Linda. Her late husband was a Baptist pastor and director of Southern Baptist Associational Mission.

The family expresses our gratitude to God for the life, labor, and love our beloved Mom gave to her family and friends. Our mourning embraces the diligent role she had in our lives, our churches, our schools, and our community.

Funeral services will be Friday, January 14, 2022, at 12 noon at the Eatons Baptist Church of Mocksville, N.C., with Pastor David Gilbreath officiating. The family will receive friends immediately following the service in the fellowship hall of the church. A private burial will follow later in the First Baptist Church of Huntersville Cemetery.1 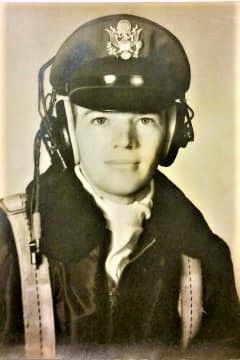 He was the son of the late Walter and Lessie Middleton Bagwell.

He was a loving husband, father and grandfather.

Survivors include his wife of 59 years, Loretta Glover Bagwell; one daughter, Nancy Penley, and husband, Billy, of Pisgah Forest; one grandson, Trenton Penley; and one sister, Opal Sayles.

While this is a very difficult time, we are also glad and rejoicing that he has gone to be with his Lord and is no longer in any pain.

F, b. 24 February 1925, d. 2 January 2012
Lillie Mae Bagwell was born on 24 February 1925 in Henderson County, North Carolina. She was the daughter of Thomas Stanhope Bagwell and Grace Naomi Spivey. As of after 1946,her married name was Ramona. Lillie Mae Bagwell died on 2 January 2012 in Buncombe County, North Carolina, at age 86
ASHEVILLE - A service honoring the life of Miss Lillie Bagwell who passed away on Monday, January 2, will be held in a private gathering of friends and family in the home of Mr. and Mrs. Tom Dellinger of the Asheville community on Friday, January 6. Both Lillie Mae, and her brother, Dan, were residents of the Mitchell Homes in Asheville, where Dan is currently a resident. Miss Bagwell was the daughter of the late Mr. and Mrs. Tom S. Bagwell of the Fairview community in Buncombe County.

Miss Bagwell was a member of the Fairview Baptist Church, and a graduate of Fairview High School, class of 1944. Employment included the S & W Cafeteria, Mt. Maker's Jewelry and Gift Shop, and the Gerber Mfg. Company, all located in or near the Asheville area.

Published in the Asheville Citizen-Times on Jan. 5, 2012.