F, b. 25 December 1913, d. 5 August 2002
Bonnie Ruth Gillespie was born on 25 December 1913. As of after 1930,her married name was Bagwell. She married Harold Allen Bagwell, son of Allen Murphy Bagwell and Annie Lee Thompson, after 1930. Bonnie Ruth Gillespie died on 5 August 2002 at age 88. She was buried at Cannon Memorial Park, Fountain Inn, Greenville County, South Carolina.

Born in Lowndesville, S.C., a daughter of the late Jesse and Nelly Jane Bonds Parnell, Mrs. Bagwell was a homemaker and a member of Fairview Street Baptist Church, where she attended the T.E.L. Sunday School Class for forty-three years, and was a volunteer at the Fountain Inn Senior Action Center for eighteen years.

F, b. 9 April 1920, d. 13 February 2013
Clarette Satterfield was born on 9 April 1920. As of after 1935,her married name was Bagwell. She married Wayman Lee Bagwell, son of John Edward Bagwell and Dora Corrine Thompson, after 1935. Clarette Satterfield died on 13 February 2013 at age 92. She was buried at Cannon Memorial Park, Fountain Inn, Greenville County, South Carolina. 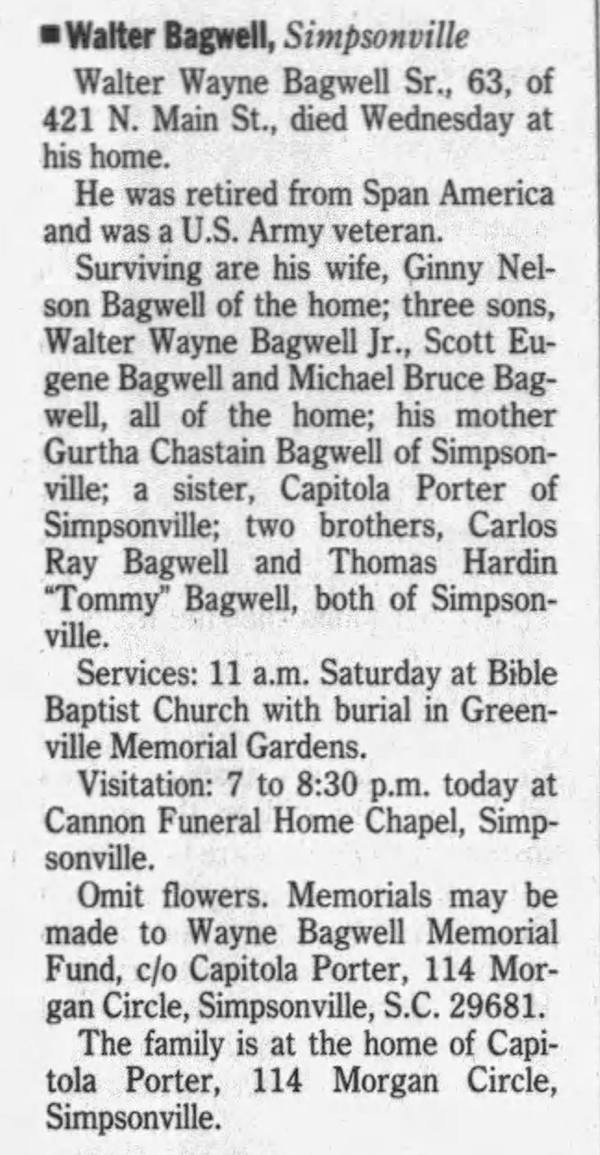 FOUNTAIN INN, SC - Mrs. Will O'Nell Brashier, 82, of Fountain Inn, S.C. passed from this life Saturday, Oct. 10, 2009, in Fountain Inn. She was born Oct. 27, 1926, in Laurens County, S.C. a daughter of the late Hitch and Noree Curry Bagwell and was the widow of Claude William Brashier. Mrs. Brashier was a member of Pleasant Grove Baptist Church and had worked for Beaunit Textiles, Fountain Inn and with Wilson Sporting Goods until her retirement.

M, b. 25 September 1925, d. 6 November 1997
Claude William Brashier was born on 25 September 1925. He married Will O'Nell Bagwell, daughter of William Hitch Bagwell and Noree Willie Curry, after 1940. He was SM1 of the US Navy. Claude William Brashier died on 6 November 1997 at age 72. He was buried at Cannon Memorial Park, Fountain Inn, Greenville County, South Carolina.

F, b. 22 December 1881, d. 18 February 1932
Alice Octavia McCarley was born on 22 December 1881 in South Carolina.1 As of circa 1900,her married name was Bagwell. She married Charlie Martin Bagwell, son of John F. Bagwell and Lucy Mathis, circa 1900. Alice Octavia McCarley died on 18 February 1932 at age 50.1 She was buried at Zion Hill Baptist Church Cemetery, Spartanburg County, South Carolina.1

Friends and relatives will remember his generosity and wit, and residents and staff will recall "Daddy B" as a devoted husband to Hazel, his wife of 71 years.

Hazel died in December 2012 and Jesse joins her now. Jesse was born last of six children in 1919 to Alice McCarley Bagwell and Charles Martin Bagwell of Spartanburg.

Eleven days prior to completing his one-year enlistment in the Army, he learned of the attack on Pearl Harbor, made his way to the nearest recruitment office, and re-enlisted for a period of indefinite service.

He married Hazel Green in December 1941; his service as an infantry soldier in Iceland and Europe kept them apart for nearly four years.

Jesse is survived by his sister, Ruby Millwood of Spartanburg; daughter and son-in-law, Marcia and Everett Yancey, of Greenville, Tn; son and daughter-in-law, Norman and Cindy Bagwell of Pearland, Tx; son and daughter-in-law, Barry and Treasa Bagwell of Gaffney, S.C; daughter and son-in-law, Laura Bagwell and Miles Denham, Jr., of Aiken, S.C; grandchildren, Michael (and Jennifer) Yancey of Wyethville, Va., and Anna (and Charlie) Mullins, of Ijamsville, Md; and great-grandchildren, Andrew Yancey of Wyethville, Va., and Aaden Mullins of Ijamsville, Md.

A graveside service is scheduled for 12:30 p.m. on Tuesday, November 19, 2013 at Greenlawn Memorial Gardens in Spartanburg with Mr. Paul Raines and Rev. Roger Ham officiating. The family will receive friends after the service at the cemetery.

The family will be at the home of Barry and Treasa Bagwell, 1965 Love Springs Road.

An online guest register is available at www.blakelyfuneralhome.com.

A native of Spartanburg, he was son of the late Charlie Bagwell and Alice Octavia (McCarley) Bagwell.

He retired from Drayton Mill, having been a supervisor in the cotton preparation department.

He was a member of St. Mark United Methodist Church. 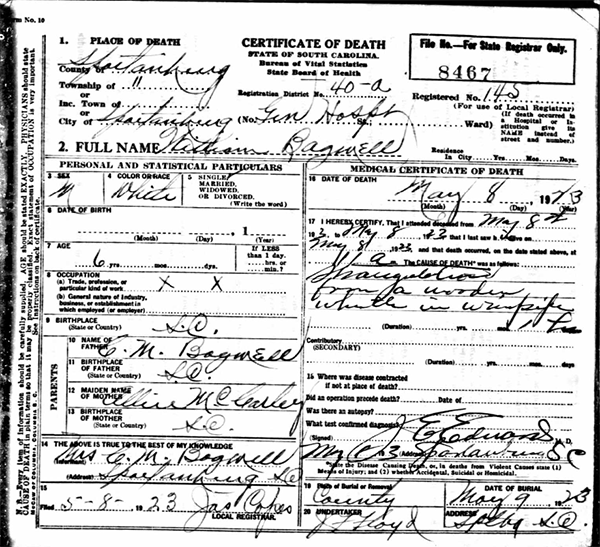 Born January 8, 1914, in the Cannons Campground community, she was the daughter of the late William Lafayette Wooten and Corrie Adeline (Cannon) Wooten and the wife of the late J. K. Bagwell.

She retired from Spartan Mills and was a member of St. Mark United Methodist Church.

The family received friends following the service at the graveside.


Frances Jett, age 88, of Converse, SC was received by her Savior, Jesus Christ, on September 8, 2022. She was the daughter of the late J. K. and Lucille Bagwell. She was the widow of Dock E. Jett. She was previously married to the late Truman Melton, father of their 3 children.
Frances was a retired secretary and constant caregiver. She was a faithful member of St. Mark United Methodist Church in Spartanburg. She was always a quiet servant of her Lord.
Frances was predeceased by a sister, Tavia. Survivors include sons, Mike Melton (Kathy) of Shelby, NC, and Scott Melton of Spartanburg, SC; daughter, Mickie Williams (Brian) also of Spartanburg, SC; step-daughter, Marie Bishop (Jerry); two grandchildren, Trey Earley (Molly) of Chesnee, SC and Amanda Melton of Charlotte, NC; step-grandchildren, Meagan Williams and Ashlyn Bishop; and a number of cousins.
Graveside service will be held 11:00 AM Tuesday, September 13, 2022 at Greenlawn Memorial Gardens, 1300 Fernwood-Glendale Rd., Spartanburg, SC 29307, conducted by Rev. David Ervin. Family will receive friends immediately afterwards.
In lieu of flowers, memorials may be made to St. Mark Methodist Church, 3055 E. Main St., Spartanburg, SC 29307.
Family will be at the home of Mickie and Brian Williams.
Floyd s Greenlawn Chapel