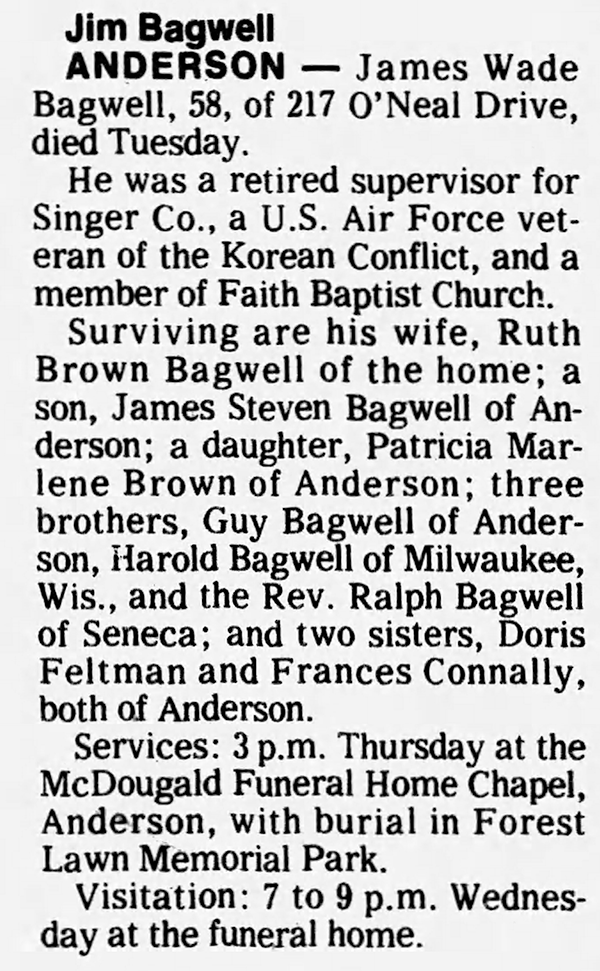 Minnie Evelyn Bagwell Stone
February 21, 1928 - September 15, 2020
West Pelzer , SC
Minnie Evelyn Bagwell Stone, 92, wife of the late Albert Milton “Buddy” Stone, Sr., passed away Tuesday, September 15, 2020.
Born in Greenville County, she was a daughter of the late Arthur Vaughn and Bertie Stone Bagwell. She retired from Bigelow-Sanford Carpet Company after twenty-nine years, was a former member of the Eastern Star, and Fork Shoals Baptist Church. Mrs. Stone was a devoted wife of sixty-five years and was the light and heart of her family. She enjoyed being surrounded by her children and grandchildren.
She is survived by her children, Albert Stone, Jr., of Pelzer, Linda Williams and her husband, Jimmy, of Williamston, Dianne Eskew and her husband, Danny, of Townville, and Elaine McClain and her husband, Dennis, of Pelzer; seven grandchildren; thirteen great-grandchildren; seven great-great-grandchildren; sister, Betty Woodson; and brother, Eddie Bagwell.
She was preceded in death by her brothers, Bill Bagwell and A.V. Bagwell, Jr; and sisters, Mary Stelling, Edna Davis, and Doris Pitts.
Visitation will be held Friday, September 18, from 11:00 am to 12:00 pm at Gray Mortuary. The service will follow at 12:00 pm in the mortuary chapel, with burial at Greenville Memorial Gardens.

Born in Williamston, SC, he was a son of the late Arthur Vaughn Bagwell Jr., and the late Myrtle Marion Stone Bagwell.

Joey was known most for his big heart, and generosity. He would give away anything he had if someone was in need and was fine going without so others were well taken care of. He loved his family, drinking Pepsi, and working on cars. Joey was mechanically gifted, and could fix anything. He was also certified for tractor trailer and industrial truck operation. He was a member of Hillcrest Baptist Church.

Along with his parents, Joey was preceded in death by his sister, Patti Alewine.

The Family will receive friends prior to the service from 1pm until 1:45pm.

Randall T. Bagwell was born circa 1950. He was the son of Arthur Vaughan Bagwell Jr. and Myrtle Marion Stone. Randall T. Bagwell died on 4 August 1990. He was buried at Graceland West Cemetery and Mausoleum, Greenville, Greenvville County, South Carolina.

Patti Yvonne Bagwell was born in 1956. She was the daughter of Arthur Vaughan Bagwell Jr. and Myrtle Marion Stone. Patti Yvonne Bagwell died on 17 June 2016
Honea Path
Patti Yvonne Bagwell Alewine, 60, wife of Frankie Alewine, of 204 Alewine Road died Friday, June 17, 2016 at her home.
Born in Anderson County, she was a daughter of the late Arthur and Marion Stone Bagwell. She attended Faith Baptist Church.
Surviving are her husband of the home, two sons, Randall Todd Bagwell (Amanda) of Knoxville, TN., and David Lee Alewine (Crystal) of Honea Path, two brothers, Danny Bagwell of Honea Path and Joey Bagwell of Williamston, three sisters, Pamela Ashley of Simpsonville, Robin Harbin of Anderson, and Cindy Clinkscales of Anderson, and four grandchildren.
Funeral services will be held at 3 P.M. Sunday at Pruitt Funeral Home Chapel with Rev. Tab Scarborough and Rev. Rickey Knight officiating. Burial will follow in Eastview Cemetery.
The family is at the home and will receive friends from 1 to 3 P.M. Sunday prior to the service at Pruitt Funeral Home.
She was buried at East View Cemetery, Honea Path, Anderson County, South Carolina.