Born in Sumter, SC, he was the son of the late James and Viola King Bagwell.

Stan was a member of Mauldin United Methodist Church. He “ran a good race and fought the good fight”. Stan used the life given him by his Lord and Savior, Jesus, to care for others while “fretting not”.

He is survived by his sister, Kathie Wilson and husband, Pete; brother-in-law, Lewis Switzer; two nieces; one nephew; and many great nieces and nephews.

In addition to his parents, he was preceded in death by his sister, Vickie Switzer.


Saturday, January 15, 2022, John’s suffering ended. He is in the presence of Jesus forever. Pretty Peggy his bride of 42 years and some of his family were with him.
John accepted Christ on June 10, 1979. He followed Christ until his last breath. Peggy was the love of his life on earth. She led him to Christ. John had a plastic eye, and he took great delight in playing pranks with it. Even in sickness, John kept the joy of the Lord. John loved to make people laugh. He had a huge heart and was a generous giver. He will be missed by all that knew him. When he was younger, he was the owner of E & M Transportation in Flagler Beach, Florida. Dedicated to the Department of Defense. While living here, he worked for GHS, Perrigo, Carter & Crawley, and Hartness International.
Peggy’s family was his family: sisters-in-law, Joy Decker, Pam McKellar (Michael), Donna Brady (Ken), and Sandy Hopper; niece, Tonya Thompson; nephews, Jamey Thompson and Ryan Brady; great-niece, Abby Mathuews; and great-nephews, Thomas Brady and Connor Brady.
A memorial service will be held 3:00 p.m. Sunday, January 23, 2022, at Eastside Worship Center conducted by Bishop Josh Childress and Dr. Julian Galloway.
Visitation will be held 2:00-2:45 p.m. Sunday at the church.

Child of George Bagwell and Mary (?)

Child of Mary (?) and George Bagwell

M
Robert Bagwell is the son of Charles P. Bagwell and Patricia H (?) 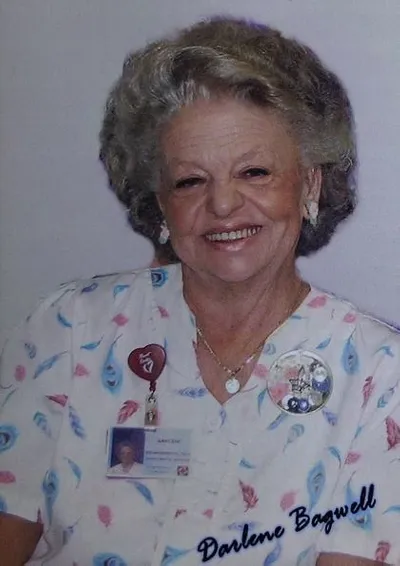